COVID-19 has caused untold global suffering—deaths, debilitating illnesses, and the disruption of social structures, not to mention economic woes. As in the case of virtually all disasters, the pandemic has brought forth both the best in humanity and the worst: acts of selflessness, kindness, generosity, and compassion, as well as panic, hoarding, defiance of reasonably protective guidelines, and other expressions of selfishness. Can historical analysis and technological innovation help us minimize future outbreaks?

Embracing Our Mandate
The global recovery, to whatever extent possible, will take considerable time, but will it also awaken us to the need for a realistic assessment of both the global dangers continually before us and the actions we can take to mitigate their devastating impact? God has never rescinded the mandate given to the first creatures made in his image (Genesis 1:28; 2:15). We are given responsibility to manage the planet for the benefit of all life. It’s a responsibility that requires ongoing research and creative, collaborative, wise responses to what that research reveals.

Earth’s climate became a focus of research once we realized we had taken its stability for granted. As warming effects began to be noticed and measured, awareness of potential danger gave rise to intensive study and then to the variety of reactions—denial or panic and calls for drastic action—such as we’ve observed over the past decade. At the same time, this looming climate crisis may have distracted us from attending to and preparing appropriately for others, such as an intense solar flare, major volcanic eruption, supernova event, etc. The current pandemic is just one of these others that could have and should have been anticipated.

Pandemics Are Not New
History teaches that plagues, epidemics, and even pandemics have been with us throughout recorded history at roughly predictable intervals. However, the intervals are just long enough that they tend to drop out of memory. People alive today have mostly forgotten about the Spanish flu of 1918. What’s more, our confidence in the advances of modern medicine may have led to the presumption that large-scale deadly outbreaks were no longer a threat. And yet the history of pandemics reveals a great irony: the wealthier and more technologically advanced our civilization, the more vulnerable we are to pandemics—and, for some of the same reasons, more vulnerable to climate instability, too.

The shift from hunter-gatherer and nomadic family groups to agrarian communities and manufacturing centers greatly increased the scale and spread of diseases. As people began to cluster in villages, towns, and cities, and trade between them increased, so did exposure to disease-causing bacteria and viruses. Increasing human population and more advanced civilization led to larger and larger cities, more comprehensive trade, greater travel across longer distances, and closer contact among dense populations of people and other creatures.

All these factors combined to yield increased opportunities for bacteria and viruses to mutate and cross species, transforming from relatively benign organisms into deadly strains that could overwhelm human immune systems. These same factors also added to the challenge of isolating infected individuals, keeping them away from people who had not yet been exposed to the known or unknown pathogen.

What especially exacerbates the potential for the spread of disease in the twenty-first century is the combined speed, volume, and diversity of trade and travel. Hundreds of millions of people travel to densely populated urban centers, as well as exotic locales, all around the world all year long. In the US alone, domestic airlines and foreign airlines serving the US carried an all-time high of 1.0 billion passengers in 2019.

Recent History of Pandemics
Since the second century AD, reasonably accurate records of pandemics have been kept. The following table shows the names, dates, and death tolls of the major pandemics of the past 2,000 years. 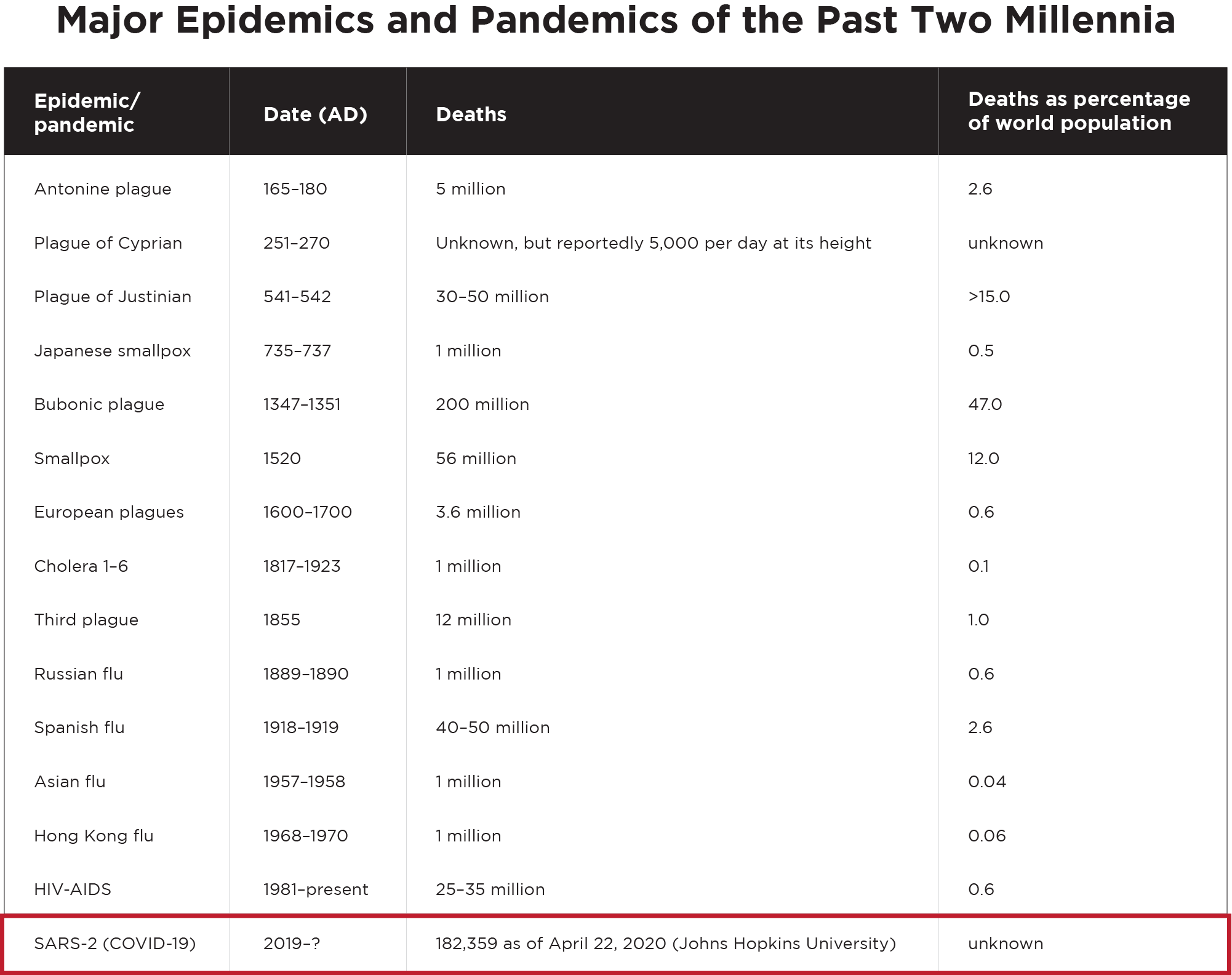 Table: Major Epidemics and Pandemics of the Past Two Millennia
adapted from Nicholas LePan, “Visualizing the History of Pandemics,” March 14, 2020, https://www.visualcapitalist.com/history-of-pandemics-deadliest/.

Diseases leading to a million or more deaths occur nearly once every century, if not more frequently. Given their relatively regular frequency, they should not catch us totally off guard. Although our advancing medical knowledge and technology have been able to reduce the death toll as a percentage of the global population, they are yet unable to prevent pandemics.

Preparing for Pandemics
During the past century, researchers have become adept at identifying the sources of pandemic outbreaks. The more recent epidemics and pandemics have most often originated from animal-to-human transmission. For example, the Russian flu arose from bird-human contact, the Spanish flu from pig-human contact, HIV-AIDS from chimpanzee-human contact, and SARS-CoV-2 (COVID-19) apparently from live animal markets in Wuhan.

This research implies that one way many pandemics can be prevented, or at least mitigated, is to ban live animal markets. If and where such markets are deemed necessary, they can at least be moved outside of crowded cities and the animals given appropriate space. The severe crowding of animals, which has a destructive effect on the animals’ health, runs counter to the Christian ethical principle of treating these creatures with appropriate care and kindness.

The need for less crowding of animals also applies to our human population. The last fifty years has seen an exponential increase in urbanization. Today, for the first time in history, more than half the world’s people live in large metropolitan centers, where population numbers and density are both increasing. This high population density often means people lack appropriate air circulation and independent plumbing. Such conditions present opportunities for bacterial and viral mutations as well as for amplified contagion.

The problem is further exacerbated by increased travel, especially by planes, trains, and buses. These modes of transportation represent extreme examples of human crowding. For all but the wealthier passengers, who can afford to buy extra space, crowding has only increased over time.

Practical Preparation
While these and other challenges seem daunting, they are not insurmountable. Much can be done both to prepare for and to mitigate the impact of future epidemics and pandemics. For example, since the fourteenth century, some form of quarantine has consistently proven to help limit pandemic death tolls. How much more is it needed now that humanity has become increasingly urbanized? By preparing to test, isolate, and track contacts of infected individuals, outbreaks can be effectively contained. This approach has proven effective.

By stockpiling essential supplies—test kits, masks, gloves, hospital equipment—and motivating manufacturers to pivot rapidly toward production of such supplies, we would save countless lives. We can encourage construction companies to equip condominiums and apartments with individualized ventilation and plumbing systems for each unit.

We can explore ways to equip airports and other transportation terminals, as well as planes, trains, buses, and subways, with air circulation systems that ensure passengers and workers are breathing clean, not infected, air. We can reconfigure modes of transport to make them sufficiently spacious to ensure healthier social distancing.

Ethical Preparation
Preparation for inevitable disasters—including viral and bacterial outbreaks, climate change, and all the catastrophes both history and science have shown us—may seem utterly infeasible, from an economic standpoint, but we must ask ourselves what makes it so. What if, for example, our government at all levels were to manage budgets in such a way as to maintain a healthy surplus (a disaster relief and recovery fund), rather than a hefty deficit? Such a scenario may seem impossible, but it has been done, and it can be done again if we turn to God for the wisdom to turn things around, step by step.

The job our Creator assigned to us to manage Earth’s resources for our benefit and the benefit of all other life can be done, but only as we turn to him for the insight, creativity, and fortitude to take the steps he reveals. We can know they come from him if they are morally and ethically sound and economically beneficial for all, especially for the poorest among us.