God’s Design For His Toyspace

In the beginning of creation above diagram depicts states.

Toyspace (collection of qv’s) is created in a manner that when human brains are exposed to its environment learning takes place. The most precious knowledge are the immutable, constants, principles,  and neo-absolutes that may be called precepts of an Absolute God. Toyspace is truly a manifestation of the Kingdom of God.  The Lord’s Prayer states “…let thy Kingdom come…”

Scientist study the world seeking for the immutable, constants, or principles. I collectively call all of above sorties as qua variant (qv) which means that a phenomenon can be observed over and over with only an insignificant varying observation. Christians believe in toyspace in the sense of “Do everything unto the Lord.” This is what genuinely constitutes toyspace. 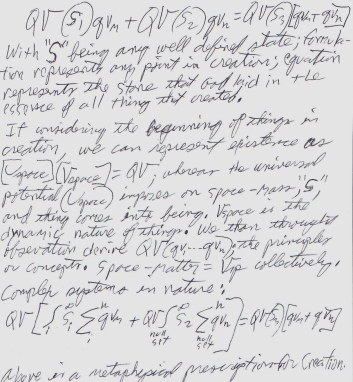 The set of the collection of qv’s exist in its wholeness as QV. Therefore, qv is part of QV which also means “The way God made things to work.” Since my goal is to relate science to religion showing that science supports religion. Religion and science are from the same Creator.

I can safely say that QV testifies of Christ Jesus, the Son of God; our Lord and Savior. The Spirit of Truth Who God put in the world testifies of the Son Of God, and brings to memory what Jesus taught.

Therefore thus saith the Lord God, Behold, I lay in Zion for a foundation a stone, a tried stone, a precious corner stone, a sure foundation: he that believeth shall not make haste.
Romans 9:33
As it is written: “See, I lay in Zion a stone that causes people to stumble and a rock that makes them fall, and the one who believes in him will never be put to shame.”