Christ’s Love From Heaven; Identity of Mind and Matter

By Will Myers
The Word of God screams to us that there is a metaphysics connection between our minds and matter. The scriptures state that the universe was created through and for His Son Who was in His blossom when the world was founded. Christ Jesus came into the world in the image of God meaning that His Spirit came from God and was God in the flesh. God created the identity of the Christ mind and matter in the universe. Jesus was witnessed performing acts on matter with His mind such as commanding a storm to stop, and killing a tree that he had condemned.
John 1:12

But as many as received him, to them gave he power to become the sons of God, even to them that believe on his name:

John 3:16
For God so loved the world, that he gave his only begotten Son, that whosoever believeth in him should not perish, but have everlasting life.
It is evidenced that God created the universe to cultivate human minds to be like Christ Jesus, His Son. God created man to possess His Holy Spirit, and return unto God again. Man is not perfect but corrupt in all of his ways; therefore, God send His Son Who was perfectly Righteous to be a stand in for sinful man. For we all have sinned and fallen short of the Glory of God. Jesus is our Lord and Savior. Man can not work himself into heaven nor can he not sin on his own accord. As a matter of fact, man is still struggling to determine what is right and what is wrong; this remains in flux.
There is an identity common to mind and matter. It’s the process of constant change. In reality the mind never stops and no matter is eternal-inert, not even a diamond.  Expressing the concept by a metaphysical expression, we have A + B = F; meaning that A and B shall always impose on each other; thereby creating F while F is imposing on another, so on and so on…where it stops only God knows. Thank God that we shall receive eternal rest with God through Christ Jesus. But at this time, we are assured that things will work supernaturally for us if our process of life is running in the Christ Spirit of the Word of God.
Romans 8:29
For whom he did foreknow, he also did predestinate to be conformed to the image of his Son, that he might be the firstborn among many brethren.
John 1:1
In the beginning was the Word, and the Word was with God, and the Word  was God.
Hebrews 11:3
Through faith we understand that the worlds were framed by the word of God, so that things which are seen were not made of things which do appear.
Psalm 19:1
The heavens declare the glory of God; and the firmament sheweth his handywork.
Isaiah 28:16
Therefore thus saith the Lord God, Behold, I lay in Zion [in the essence of things] for a foundation a stone, a tried stone, a precious corner stone, a sure foundation: he that believeth shall not make haste.

Romans 1:20; “For the invisible things of him from the creation of the world are clearly seen, being understood by the things that are made, even his eternal power and Godhead; so that they are without excuse:”

Colossians 1:27-28;  27 To whom God would make known what is the riches of the glory of this mystery among the Gentiles; which is Christ in you, the hope of glory:”  28 Whom we preach, warning every man, and teaching every man in all wisdom; that we may present every man perfect in Christ Jesus: 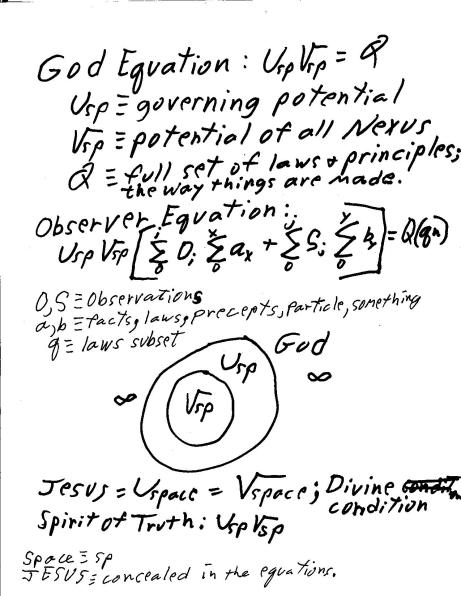