Zones where advanced life can exist in the universe just became stricter. Astronomical researchers have discovered that livable neighborhoods must include not only favorable planet-to-star conditions but also galactic and supergalactic features.

Cosmic Temporal Habitable Zone
At the January 2017 meeting of the American Astronomical Society, Mason first addressed the subject of cosmic, galactic, and supergalactic habitability in a paper titled “Habitability in the Local Universe.”4 Therein, he pointed out that long-term habitability on the surface of a planet requires a prerequisite minimum abundance of several different elements. Animals, for example, require certain minimum abundances of twenty-two different elements in the periodic table. Mason explains that it takes a minimum amount of time for star formation and ongoing star burning within a galaxy to generate (through nucleosynthesis) the requisite abundances of these life-critical elements.

That minimum time is about nine billion years after the cosmic creation event. Though not mentioned by Mason, there is also a maximum time. Relatively aggressive ongoing star formation is necessary to sustain the spiral structure of a galaxy. When that star formation ceases, the spiral structure collapses and then the average separation between stars becomes too small for life to survive. Furthermore, virtually all planets within such a galaxy become exposed to the deadly radiation from one or more supermassive black holes.

Galactic Habitable Zones
In a subsequent paper coauthored with Peter Biermann5 and in a paper delivered at the January 2019 American Astronomical Society meeting,6 Mason discussed galactic habitability conditions in addition to the galactic habitable zone. The galactic habitable zone refers to a narrow distance range from the center of a spiral galaxy where a star revolves around the center of the galaxy at virtually the same rate that the galaxy’s spiral structure rotates (see figure 1). Only within this narrow distance range does a star and its system of planets cross spiral arms infrequently enough (less than once per billion years) that it becomes possible for advanced life to exist on one of the star’s planets. 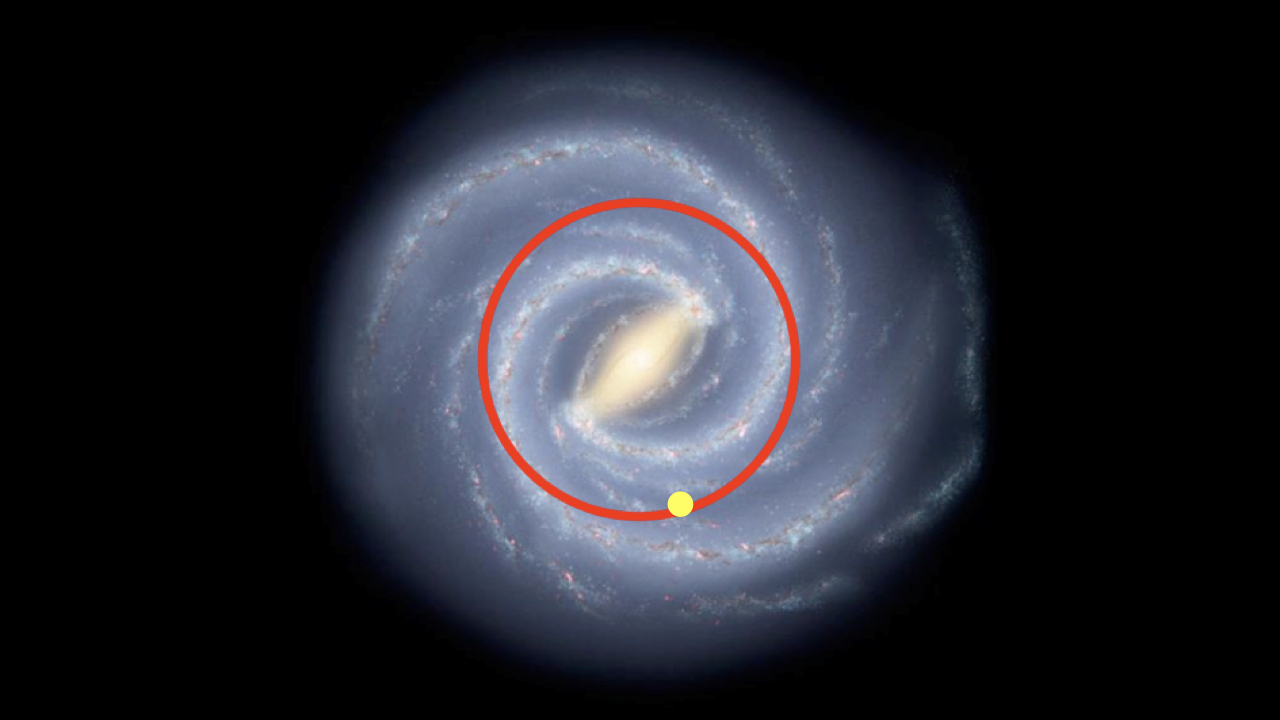 Figure 1: The Galactic Habitable Zone. Only a star and its system of planets located very near the red annulus will experience very infrequent crossings of spiral arms. The yellow dot represents the present position of the solar system. Image credit: NASA/JPL-Caltech/R. Hurt; Diagram credit: Hugh Ross

Mason and Biermann also explain how the activity level of our galactic nucleus must be fine-tuned. It takes small dwarf galaxies being regularly absorbed into the nucleus of our galaxy to sustain the ongoing star formation that is critical for maintaining our galaxy’s spiral structure. However, if our galaxy were to absorb or merge with a large dwarf galaxy, that absorption or merger could activate our galaxy’s nucleus. That activation would shower the entire extent of our galaxy with deadly radiation. Fortunately, our galaxy is absorbing dwarf galaxies of the just-right size and at the just-right rate to make possible the survival of advanced life on Earth.

Supergalactic Habitable Zone
Only in a cluster of galaxies will a galaxy like ours have a sufficient supply of dwarf galaxies to sustain its spiral structure for many billions of years. Our galaxy cluster, the Local Group (see figure 2), has the distinction of possessing many dwarf galaxies but no giant galaxies. Our Local Group also has the distinction of residing on the outer fringe of the Virgo Supercluster of galaxies. 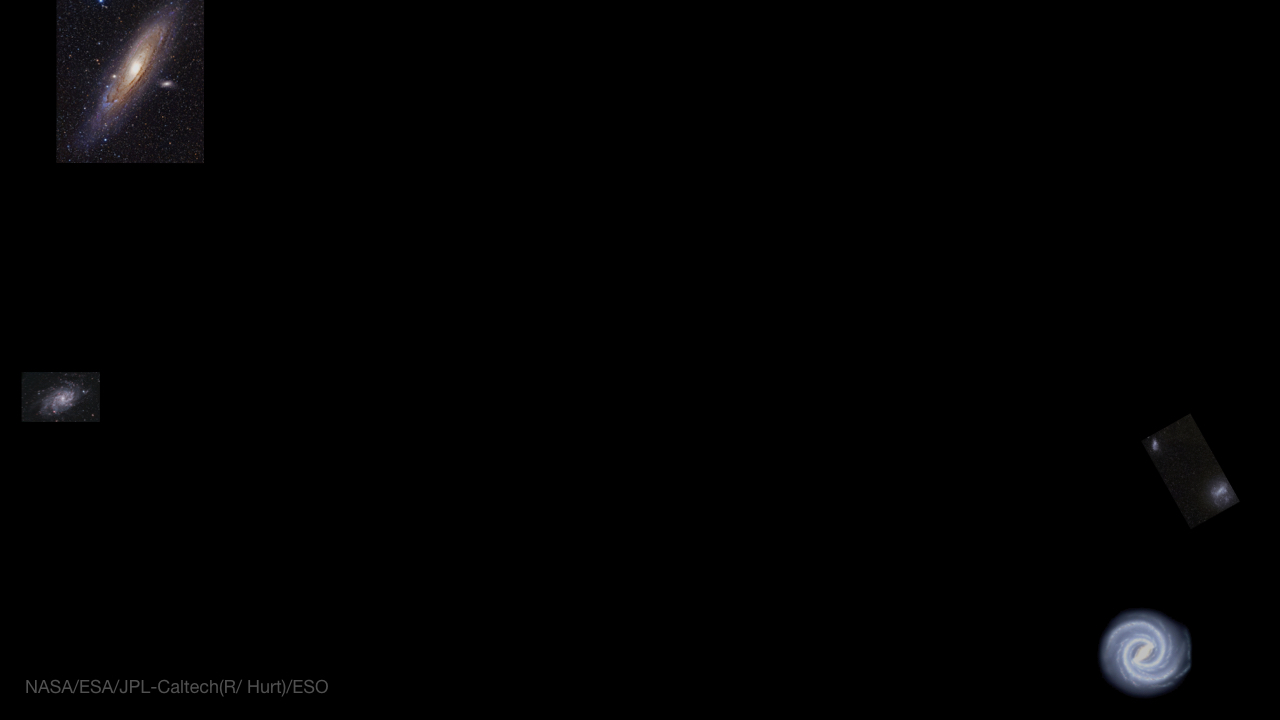 Figure 2: The Local Group, Our Galaxy’s Galaxy Cluster. The Milky Way Galaxy is to the lower right. Above it are the Large and Small Magellanic Clouds. To the upper left are the Andromeda Galaxy and its system of dwarf galaxies. Below Andromeda is the Triangulum spiral galaxy. Image credit for the galaxies: NASA/ESA/ESO/JPL-Caltech/R. Hurt; Map credit: Hugh Ross

Layers of Design
A star and its system of planets must be exquisitely designed in many different ways for advanced life to be possible on one of the star’s planets. Thanks to the findings of researchers Mason and Biermann, we now appreciate more than we have before that it also takes exquisite fine-tuning of the universe, the planetary system’s host galaxy, the host galaxy’s galaxy cluster, and the host galaxy cluster’s supercluster of galaxies for advanced life to possibly exist and thrive. As the agnostic astronomer Paul Davies wrote in his book The Cosmic Blueprint, “the impression of design is overwhelming.”7

Earth has experienced many tectonic plate collisions throughout its history. By far the most dramatic collision began 50 million years ago and continues to this day between Asia and the Indian subcontinent (see figure 1).1 Currently, the Indian subcontinent moves 5 centimeters per year in a northeasterly direction and, so far, has pushed a little more than 2,000 kilometers (1,300 miles) into the Eurasian plate.

First Image of a Black Hole

When Albert Einstein first proposed his general theory of relativity, it transformed the way scientists thought about space and time. Specifically, the theory predicted that mass could be so compressed that it would rupture the fabric of space-time. Scientists called these things black holes. Over the last hundred years, numerous experimental and theoretical findings have affirmed the existence of black holes, but to date scientists had not imaged one. That changed with a first-ever radio image of galaxy M87, which revealed the shadow of an enormous black hole at its center. This first astronomical image of the black hole shadow highlights a number of cool things about black holes and carries worldview implications.

Why Mitochondria Make My List of Best Biological Designs

A few days ago, I ran across a BuzzFeed list that catalogs 24 of the most poorly designed things in our time. Some of the items that stood out from the list for me were: