Which model, naturalistic evolution or supernatural creation, best explains the pattern of life’s history on Earth? If a test produces “strikingly divergent results” for the expectations of a model, what does that tell us? A new study on speciation and extinction rates provides persuasive evidence.

Model Tenets
A fundamental tenet of all naturalistic models for the history of Earth’s life is that natural changes in the genomes of life will be responsible for the observed changes in the physical body structures (morphology) of life. Consequently, evolutionary trees (phylogenies, see figure 1) developed from the observed patterns in present-day genomes and the presumed natural rates of change of those genomes (molecular clocks). Assuming that strictly natural processes are responsible for the changes occurring throughout the history of life, the phylogenetic trees should match the morphological changes and the timing of those changes observed in the fossil record (or paleontological trees—see figure 2).

The same kind of match between the paleontology and phylogenetics can be realized if God intervened throughout life’s history. However, apparently only supernatural interventions can explain significant mismatches between phylogenetic and paleontological trees.

Figure 1: Phylogenetic Tree of Life Derived from Completely Sequenced Genomes. The center represents the presumed first life-form on Earth. The genomes denoted on the outer circle are based on actual genetic data. The branching patterns in the inner circle presume that all species are entirely related to one another through strictly natural processes. Image credit: Ivica Letunic 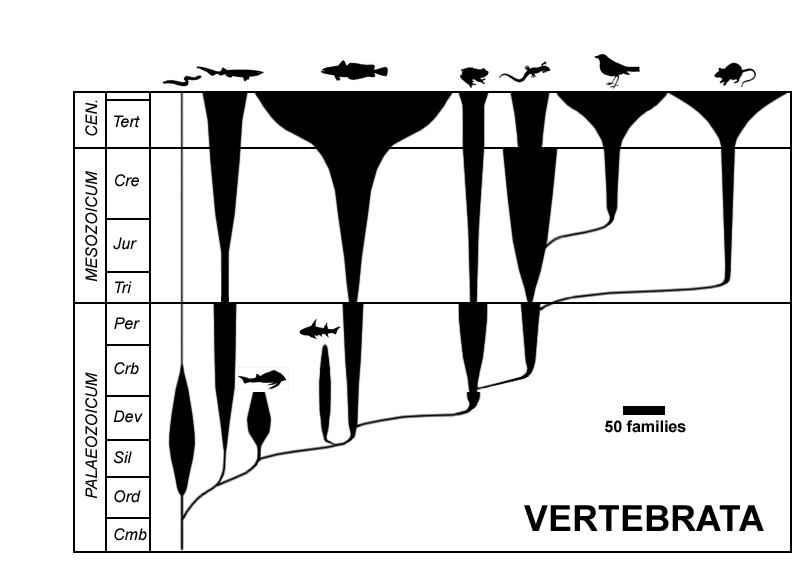 Figure 2: Spindle Diagram of the Presumed Evolution of Vertebrates. Width of the spindles indicates the number of extant families or the number of families represented in the fossil record. The curved (presumed) connecting lines are not supported by any physical remains. Image credit: Peter Bockman

Silvestro, Warnock, and their two colleagues do not concede, however, that supernatural interventions explain the “strikingly divergent results.” They attempt to offer a possible naturalistic explanation.

Divergence Is Real and Striking
Biologists use over a dozen different definitions of a species. In their paper, the Silvestro-Warnock team defines a species as “an identifiable taxonomic unit (a lineage) that can persist through time, give rise to other species, and become extinct.”3

The team first recognizes that since “extant and fossil species are samples of the same underlying diversification process,”4 if the diversification process is by strictly natural means, researchers expect that in all cases the phylogenetic (presumed evolutionary) trees will match the paleontological (fossil record) trees. To put it another way, a match is expected since “methods used to estimate rates [of change] from fossils and phylogenies are based on the same underlying mathematical birth-death theory.”5 The team then documents that evolutionary biologists can no longer deny the frequent and striking divergences between phylogenetic and paleontological trees.

The Silvestro-Warnock team cited a recent study of extant terrestrial Carnivora.6 There, the estimated mean species longevity based on fossil evidence was 2.0 million years, contrasted with 9.8 million years derived from phylogenetics. They also cited a study demonstrating incongruence between phylogenies and fossils for primates.7 They noted that, at least for mammals, the occurrences of congruence are few.8

“Phylogenetic estimates of diversification rates among cetaceans suggest speciation has exceeded extinction over the past 12 Myr9implying diversity has increased towards the recent. In contrast, analyses of the cetacean fossil record indicate extinction has exceeded speciation over this same interval, and that the diversity of cetaceans was in fact much higher than it is today.”10

In other words, the naturalistic biological evolution model based on phylogenetics predicts that introduction of new species has exceeded extinctions, but the fossil record shows that the reverse is true. The research team did not address the fact that the discrepancies between phylogenetics and the fossil record appear to increase with the complexity and the adult body size of the genus. By contrast, such a correlation is predicted from a biblical creation model perspective for life.11

Silvestro, Warnock and collaborators do point out that several other researchers have attempted to explain the discrepancies by underestimates of the statistical and systematic errors in the two methods. However, the discrepancies in fact are much too large to be attributed to these errors.12

Attempted Reconciliation
The Silvestro-Warnock team suggests that many of the discrepancies between phylogenetics and the fossil record are due to sensitivities to different speciation modes. They identify three distinct modes of speciation that can leave behind fossil evidence without impacting the calculated phylogenetic trees:

They also point out that extinction without replacement is a frequent occurrence, where a species becomes extinct without leaving any descendants. More simply put, the fossil record includes extinct and extant (living) species; whereas phylogenetic data typically include extant species only.

This requirement of higher speciation rates is all the more problematic for Earth’s most advanced species. For mammals, birds, and advanced plants, the observed extinction rates far exceed the observed speciation rates during the era of human existence (God’s seventh day when, according to Genesis 2, God ceased from his creation work and allowed natural processes operate).

Some evolutionary biologists will insist on the caveat that perhaps some unknown natural process might salvage a reconciliation between phylogenetics and paleontology. However, it is difficult to conceive how a natural process of sufficient magnitude to reconcile phylogenetics and paleontology could remain undiscovered. It appears to me that a creation model positing that the supernatural Creator intervened at several times throughout life’s history to replace life-forms driven to extinction fully reconciles this “discrepancy.” I am reminded of a verse (Psalm 104:24) from the longest of the creation psalms:

How many are your works, Lord! In wisdom you made them all; the earth is full of your creatures.

Blaise Pascal on the Human Condition

Poets, playwrights, philosophers, and psychologists all take their turns offering insights on the “human condition.” They seek to explain the basic nature, identity, struggle, and aspirations of human beings. In fact, all philosophies and religions try to define and explain humanity’s underlying condition. But do any of them succeed?

Time for both the universe and us as humans is linear. That is, for us, there exists only one dimension of time. In that one dimension, time moves inexorably forward. We can slow down the forward passage of time by adjusting our velocity, but we cannot reverse or stop it. Simply put, there is always a past, a present, and a future for the universe, and for us as its inhabitants.

Dark Matter from before the Big Bang?

“In the beginning God created the heavens and the earth.” The Bible starts with a remarkable claim: the universe began to exist. However, a recent paper generated press that seems to undermine this important biblical statement.1 Various popular sources ran headlines like “Big Bang Bombshell: Did Dark Matter Come BEFORE Birth of Universe?,” “Dark Matter May Have Existed before the Big Bang, New Math Suggests,” and “Dark Matter May Be Older Than the Big Bang.” Some of the coverage even hints that scientists might not understand the universe as well as previously thought. Will science rebuff a biblical claim? Let’s look at this discovery and see what it tells us about the universe and how well the Bible describes it.