Breakthroughs in astronomy in the early part of the twentieth century were the first of many scientific confirmations of the biblical cosmic creation model. It was the discovery of cosmic expansion that first persuaded astronomers that the universe had a beginning. Detailed measurements of the expansion of the universe throughout its history led to the recognition that space and time were created and that a Causal Agent beyond space, time, matter, and energy created our universe of space, time, matter, and energy.1

Cosmic Expansion Rate Tension
Lately, however, tension has arisen between present-day and very distant (13.8 billion years ago) measurements of the cosmic expansion rate. Last year, a team led by Nobel laureate Adam Riess used Cepheid variable stars to calibrate the distances to local galaxies hosting type Ia supernovae. Based on this calibration, Riess’s team determined that the universe is expanding at a rate of 74.03 ± 1.42 kilometers per second per megaparsec.2 (1 megaparsec = 3.26 million light-years.)

This value differs, however, from the one based on a detailed map of cosmic microwave background radiation (CMBR), a map that reveals the state of the universe when it was only 380,000 years old. The CMBR-based cosmic expansion rate = 67.4 ± 0.5 kilometers per second per megaparsec.3

This difference between local (present-day) and very distant (13.8-billion-years-ago) determinations of the cosmic expansion rate = 6.6 kilometers per second per megaparsec. This difference amounts to a 4.4 standard deviation discrepancy. Such a large discrepancy implies that the difference is unlikely to be a statistical fluke. It is much more likely due to systematic uncertainties (instrumental effects and/or overlooked physical effects that push the measurements either above or below the true value) and/or unforeseen physics (overlooked physical phenomena).

Resolution of the Tension: Tip of the Red-Giant Branch Stars
About ten months ago, I wrote a blog demonstrating several ways that the tension between the CMBR-based and the Cepheid-supernovae-based measurements for the cosmic expansion rate could be resolved.7 Thanks to new sets of measurements, the means for resolution is now evident.

Astronomers have known for more than a decade that there was a second, independent method for calibrating the distances to type Ia supernovae, the basis for determining the cosmic expansion rate during the universe’s past half history. That method was to use “tip of the red-giant branch” stars.

A few months ago, a team of thirteen astronomers led by Wendy Freedman and Barry Madore (a classmate of mine at the University of Toronto), published the most comprehensive determination of the cosmic expansion rate based on TRGB.8 They used 20 eclipsing binary stars in the Large Magellanic Cloud (see figure 1) to determine, by far, the most accurate geometric distance to that galaxy and, hence, to its brightest red-giant branch star. That distance = 162.04 ± 0.30 million light-years.9 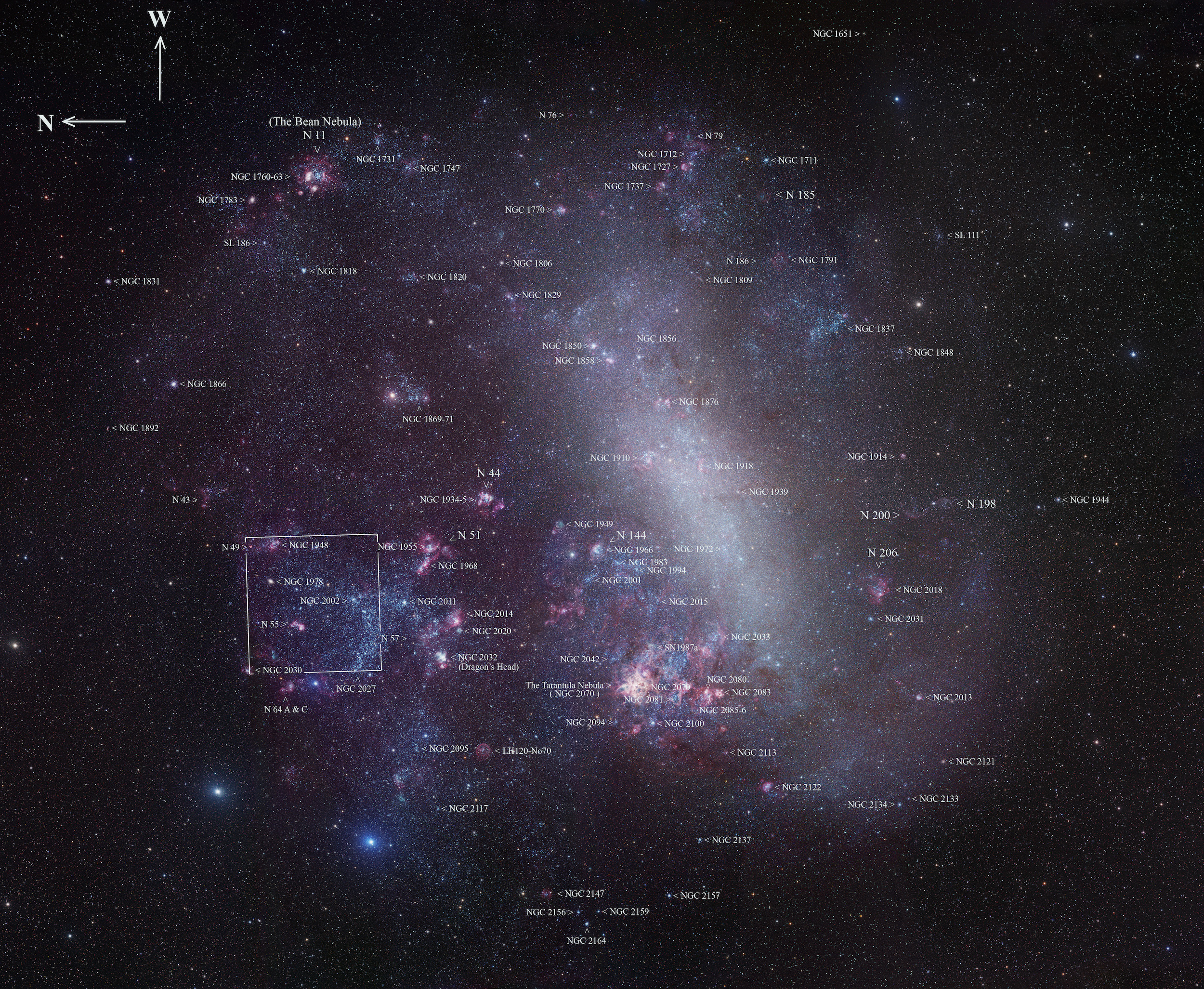 Based on the new geometric distance to the Large Magellanic Cloud and their observations of TRGB in galaxies hosting type Ia supernovae, the Freedman-Madore team determined that the cosmic expansion rate over the past seven billion years = 69.8 ± 0.8 kilometers per second per megaparsec.10 This value is discordant with the CMBR-based cosmic expansion rate by only 2.4 kilometers per second per megaparsec.

In their paper, Freedman and Madore’s team presents a diagram showing the history of cosmic expansion rate measurements using the three methods described here: CMBR, Cepheid variable stars, and TRGB. Figure 2 below is their diagram.

Resolution of the Tension: Dark Energy and the Local Hole
There are other likely reasons for the remaining difference between the CMBR and TRGB determinations. I mentioned one in my June 24, 2019, blog.11 Dark energy, the dominant component of the universe, will more strongly accelerate the cosmic expansion rate when the universe is old and its space surface is larger than when it is young and its space surface is smaller. The latest and best measurements of dark energy imply that the universe should be expanding about one percent faster (about 0.7 kilometers per second per megaparsec faster) now than when it did when the universe was only 380,000 years old.

Another likely reason has been the subject of several recent research papers.12 A local underdensity of galaxies and galaxy clusters would cause an increase in the local value of the cosmic expansion rate. A study based on the CLASSIX galaxy cluster survey revealed a 30 percent underdensity of matter in a local region with a diameter of 330–450 million light-years.13 Inside this underdense region, observations of the cosmic expansion rate will be about 4 kilometers per second per megaparsec greater than for the rest of the observable universe. Distance indicators outside this local underdense region will reduce this enhanced cosmic expansion rate but not to the point of making the enhancement trivial. The local underdense region probably enhances the TRGB determination by 1.0–1.6 kilometers per second per megaparsec.14

The combination of the new TRGB cosmic expansion rate determination, the impact of dark energy, the adjustment arising from the local underdensity, and the range of probable errors in all the measurements now fully resolves the tension in the cosmic expansion rate determinations. The biblically predicted big bang creation model is not in trouble; there is no cosmic age discrepancy. The latest observations demonstrate that the more we learn about the universe the more evidence we accumulate for what the Bible thousands of years ago taught about the origin and history of the universe.

Reason, Emotion, and Watching Star Trek during the Pandemic

Sheltering in during the pandemic has left me with more downtime than I’m used to. And watching too much news tends to increase my anxiety level. So, along with writing books and blog articles, I have tried to focus my attention on prudent activities. This includes pursuing my spiritual devotions, spending time with my wife, and reading classic books. But I have also sought some escape time by rewatching some of my favorite movies and television programs.

My wife is very sensitive to cold spots in our home. So is our cat. Both can sense tiny temperature differences among the rooms in our home and determine which room is the coldest. Based on that sensitivity, they will do everything they can to avoid spending time in our home’s cold spot.

Bringing Hope to the COVID–19 Days Ahead

With everyone’s life disrupted, I find I am having many conversations with worried colleagues, friends, and family. One friend even got me to do a video interview with her to share with her coworkers and friends. She said she felt selfish having access to a SARS virologist amid a full-blown pandemic.