How Did Earth Get Its Long-Standing Stable Climate?

In last week’s blog1 I described how a careful reconstruction of temperature proxies at sites all over the world revealed that the climate stability humans have enjoyed over the past 9,500 years was about twice as stable as scientists had previously concluded. That is, we are twice as blessed as we had previously thought. Thanks to the extreme climate stability of the past 9,500 years, we have been successful in launching and sustaining global high-technology civilization and in building our population up to seven billion individuals.

I stated last week that I would describe in this blog the new discoveries that explain how we got such a long period of extreme climate stability. I now realize that I cannot do justice to all these discoveries in one blog. This blog is the first of two describing the miraculous designs of Earth’s recent history that gave us the remarkable gift of extreme climate stability in the midst of an ice age cycle.

As I briefly summarized in last week’s blog and describe in much more detail in my book, Improbable Planet,2 it is nothing short of a miracle that we have had such a long period of extreme climate stability at the optimal temperature for global high-technology civilization. Making the climate stability epoch all the more miraculous is that it occurred and is occurring in the midst of an ice age cycle. As I explained in last week’s blog, the ice age cycle drives extreme climate instability, not the opposite (stability). In fact, the past 2.588 to 0.009 million years ago has seen the greatest continuous climate instability in the entire 4.566-million-year history of Earth.

Now, thanks to a new discovery and a long-known temperature anomaly that occurred just previous to the 9,500-year epoch of extreme climate stability, scientists may be close to understanding how such an epoch came about. To put that anomaly and the new discovery in context, it is important to understand the nature of the ice age cycle.

Ice Age Cycle
Earth’s ice age cycle has persisted throughout the past 2.588 million years. For all but the last 800,000 years of that cycle the period has been 41,000 years. This 41,000-year periodicity was driven by the 41,000-year cycle of variation in the tilt of Earth’s rotation axis.

I wrote a series of three blogs where I explained how the period of Earth’s ice age cycle transitioned, beginning about 800,000 years ago, from 41,000 years to approximately 100,000 years. One can access those blogs here,3 here,4 and here.5

Figure 1 shows the global mean (average) temperatures throughout the last four ice age cycles. This graph shows that roughly every 100,000 years the global mean temperature very briefly rose to about 2°C above the present temperature. It also shows that whenever that occurred, Earth quickly dropped into a long cold period where 20–23 percent of Earth’s surface was covered with thick sheets of ice. 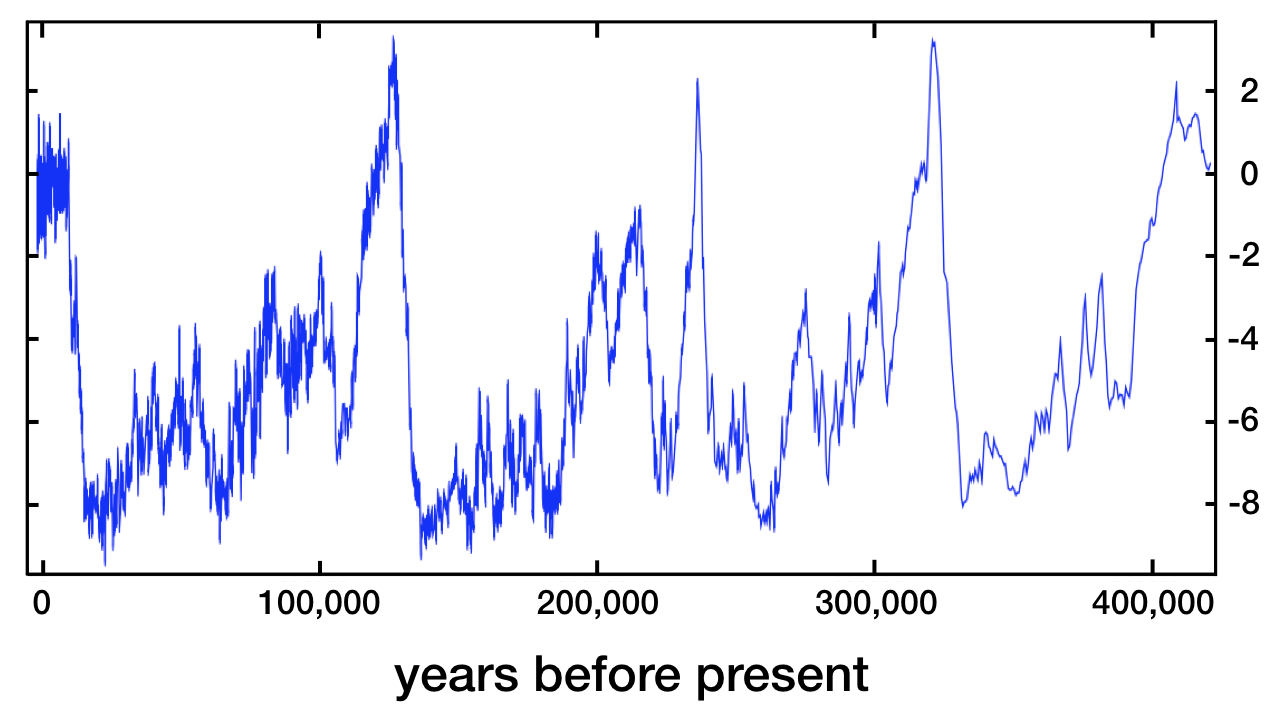 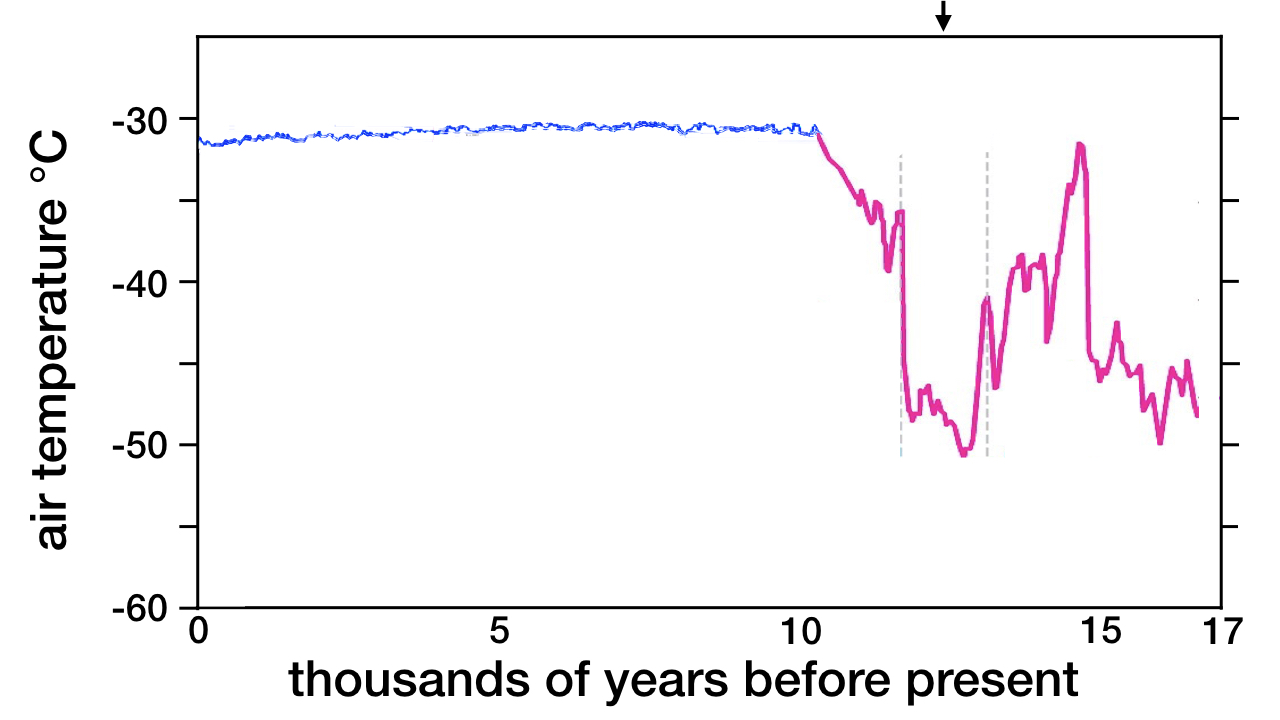 The Younger Dryas cooling event is unique to the last cycle. It is not present in cycles previous to the last. In the midst of a rapid increase in global mean temperature came a sudden drop of 10°C (18°F), a drop that was sustained for 1,200 years, followed by a sudden rise of 13°C (23°F). Both the sudden drop and the sudden rise occurred over periods of under 20–50 years.7

Cause of the Younger Dryas Temperature Anomaly
The consensus scientific explanation for the cause of the Younger Dryas is a near total or complete shutdown of the Atlantic Meridional Overturning Circulation (AMOC), popularly known as the Gulf Stream. The termination of the flow of warm tropical water into the North Atlantic would have reversed the melting of the great North American and European ice sheets. The return of the great ice sheets would have cooled all Earth’s continents and especially North America, Europe, and northern Asia.

Evidence for the termination of the AMOC throughout the Younger Dryas is threefold. First, the Southern Ocean waters became warmer9 as a result of the AMOC being turned back into tropical waters. Second, cold water flowed from the seas adjacent to East Greenland and Iceland into the Nordic seas.10 Third, the injection of cold fresh water into the North Atlantic interrupted deep and intermediate depth AMOC circulations.11

Lake Agassiz formed during the deglaciation of North America. Figure 3 shows Lake Agassiz as it was 13,000 years ago. 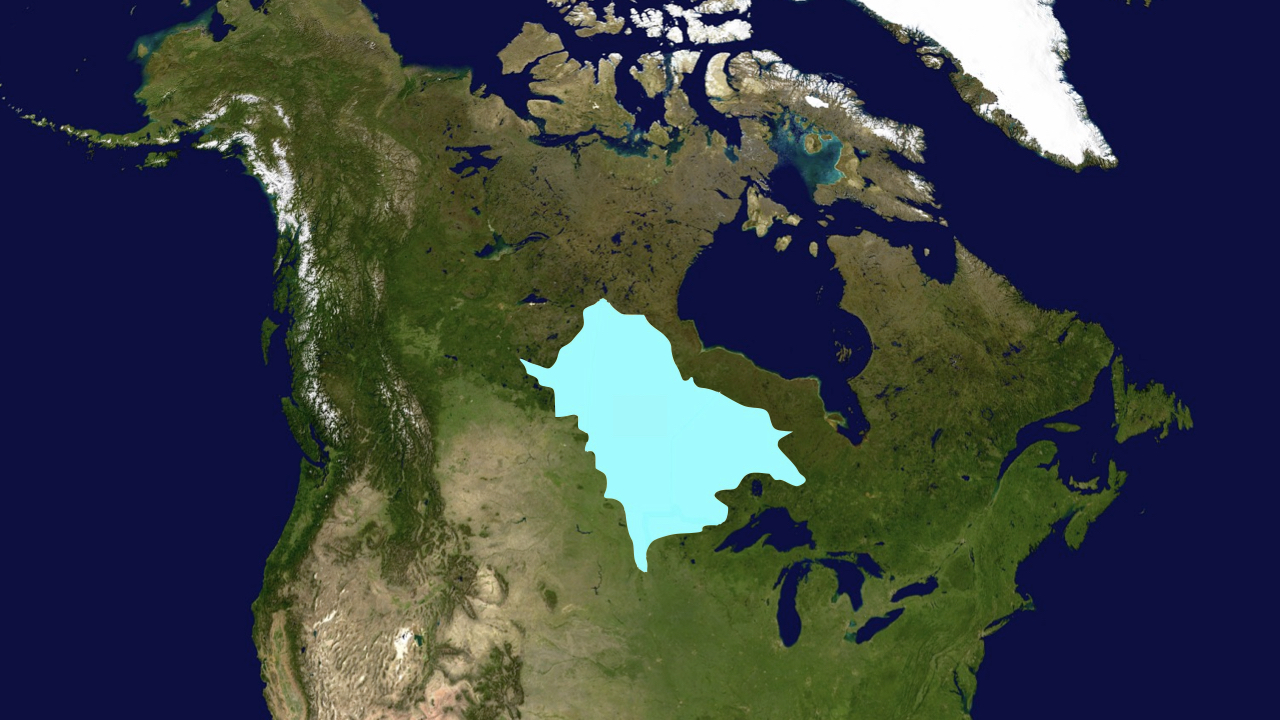 Figure 3: Lake Agassiz just before the beginning of the Younger Dryas event. By this time, the North American ice sheets in the west had largely melted away, leaving behind a gigantic lake of glacial meltwater. Ice sheets remained that covered the entire Canadian arctic archipelago, Hudson Bay, the eastern Northwest Territories as far west as Great Slave and Great Bear Lakes, and Ontario and Quebec down to within a few tens of miles of the Great Lakes and the St. Lawrence River. North America image credit: NASA

Asteroidal Impact?
In 2007 a team of 26 physicists, geologists, anthropologists, and chemists noted that at Clovis age sites across North America, thin layers exist. They contain magnetic grains with iridium, magnetic microspherules, charcoal, soot, glass-like carbon containing nanodiamonds, and fullerenes with extraterrestrial helium that date to 12,900 years ago.15 The team demonstrated that these ingredients are or could be evidence for an extraterrestrial impact event. They concluded that a large extraterrestrial object exploded over northern North America which destabilized the Laurentide Ice Sheet and triggered the Younger Dryas cooling event.

Two research teams called into question the nanodiamond16 and charcoal/soot17 evidence, respectively. However, a team of Harvard University planetary scientists led by Michail Petaev noted that a large platinum anomaly in the Greenland ice cores—a signature of an iridium-poor iron asteroid—corresponds to the onset of the Younger Dryas.18 Petaev’s team calculated that the asteroid would need to be 0.8 kilometers in diameter to explain the observed platinum anomaly.

Physicist Mark Boslough, in a reply to the Petaev team’s paper, expressed doubt about a collision event by such a large asteroid.19 He pointed out that collision events by iron asteroids as large as 0.8 kilometers are extremely rare events, occurring only once every several tens of millions of years. Furthermore, he calculated that such an iron asteroid collision event would yield a crater 15–20 kilometers in diameter. It would be nearly impossible, Boslough claimed, for such a large crater created as recently as 11,900 years ago, to elude discovery. He suggested instead that the platinum anomaly was caused by the Cape York meteorite (see figure 4). Eight large iron meteorites, weighing 34, 22, 3.8, 3.3, 0.9, 0.6, 0.1, and 0.02 tons, respectively, have been recovered from northwestern Greenland. Their common chemical makeup and element abundance ratios affirm that they are all from the same body. 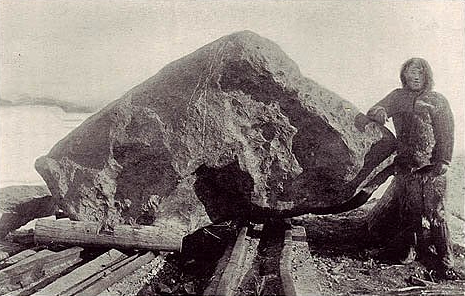 Figure 4: Robert Peary Beside the Largest Fragment of the Cape York Meteorite. This 34-ton fragment now is on display at the American Museum of Natural History. Image credit: Robert E. Peary

Petaev’s team responded to Boslough’s reply.20 They pointed out that the platinum anomaly persisted for far too long in the Greenland GISP2 ice core for the meteorite body to be only 10–100 times larger than the combination of the eight large meteorite fragments comprising the Cape York meteorite. They stood by their claim that the platinum anomaly resulted from an extraterrestrial impactor that generated global consequences.

The Drama Continues
Just a few weeks ago, a team of seven geologists announced their discovery of the nearly impossible crater, very recently formed, not just 15–20 but 31 kilometers in diameter! While it’s “nearly impossible” for some people, this kind of miraculous activity appears to be routine for an intelligent, loving Creator who fashioned this improbable planet for human flourishing. In my next blog I will describe this discovery and the likely role it played in granting us a 9,500-year period of extreme climate stability.

Social media and the internet allow ample opportunities to discuss the truth claims of historic Christianity. A while ago I interacted with a skeptic who had some questions about an article I wrote, “The Historic Alliance of Christianity and Science,” in RTB’s former magazine Facts & Faith (vol. 12, no. 3).

How the Sun’s Mass Affected Earth’s History of Life

For those of us who live in the northern hemisphere, December is a good time to remind everyone about the Sun. It is the month when the Sun spends the fewest hours per day above the horizon. Where I was raised in coastal British Columbia, December was also a month characterized by incessant rain. I remember several Decembers when the Sun never made its appearance in the sky.

Can we justify concepts like logic, moral values, and universals from a naturalistic, atheistic perspective? Or do we need a transcendent grounding like historic Christianity’s explanation for these meaningful realities?