Science Support The Son Of God; Our Savior

Scientist searches for absolutes. God is an absolute; therefore, scientist are searching for God. Principles must be true all the time given conditions that the principles are based. The universe,  as random as it may appear to visual observation, operate by perfect invisible laws which are eternal; even one strange particle is expressing an invisible principle.

Colossians 1:16
For in him all things were created: things in heaven and on earth, visible and invisible, whether thrones or powers or rulers or authorities; all things have been created through him and for him.
Romans 1:20
For since the creation of the world God’s invisible qualities—his eternal power and divine nature—have been clearly seen, being understood from what has been made, so that people are without excuse. 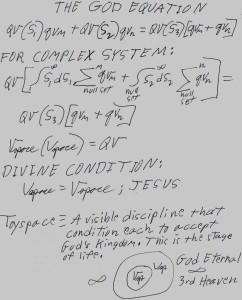 Before the big bang happened there existed one Potentiality (Uspace) that determined creation as it is today alone with man and his brain and potentialities of the brain, the mind. One might think that matter is an absolute and final definition of mass or that the Greeks concept of ether is obsolete. As things are now, mass can be thought of being concentrated energy that is following Uspace dictates and that field is signaling all physical actions similar to the Greeks concept of everything exist in ether.
Man has been learning about the behavior of things in this physical world.  Man seeks to predict the nexus of all things. Vspace is the potential of all Nexus. There is no use if a man stands and observes an object; man observing the change of object and the change of change (acceleration) is gaining useful information and can codify the phenomenon (QV: the way God made things to work).  A metaphysical equation can symbolically represent such endeavors: UspaceVspace = QV. I call this the existence equation of the God Equations in the diagram. This equation states that everything already exist to be discovered in a discrete manner. The God Equation #2 is the observer equation and is in the diagram above.  It symbolically represents man’s search for knowledge which includes scientific endeavors.
Scripture says that first man, Adam, was in God’s Kingdom. This means that Adam had the Uspace Potential, but when he was kicked out of the Kingdom he has to learn how to return to the Kingdom of God. Adam and Eve became exposed to the natural world and observed Vspace, the nexuses of all things because nothing is static; not even a diamond. Man’s concepts are actually precepts of the absolute concept. I call this Concept Eternal God Who imposed Uspace upon energy and formed the universe and all life forms. All of man’s precepts lack perfection. One can not arrive at perfection using all imperfect elements. As a result, God sent His Son to redeem man. Sin is separation from God, and perfection can not happen. Jesus paid our sin debt and guides each of us into God’s Kingdom again. Jesus (Uspace) is that Potential. Second man called into the Kingdom (Uspace) is that Potential also.
Knowledge can aid us to recognize other higher precepts. The true worth of  knowledge is to recognized Jesus(Uspace), God’s Righteousness and Perfection,  and be saved. Jesus is the only one that leads to the Father. All scripture converges unto Jesus(Uspace). There are many ways to Jesus; this is our testimony, but there is only way into the Kingdom of God, and that is Jesus(Uspace) that one Potentiality of  all creation.
*** Will Myers
infinityads_enable_pop = true;
infinityads_adhere_opt=’left’;
infinityads_frequencyCap =6;
infinityads_enable_inter = true;
infinityads_maxad = -1;
infinityads_hourcap = -1;
infinityads_showcap = 2;
infinityads_durl = ”;
infinityads_layer_border_color = ”;
infinityads_layer_ad_bg = ”;
infinityads_layer_ad_link_color = ”;
infinityads_layer_ad_text_color = ”;
infinityads_text_link_bg = ”;
infinityads_text_link_color = ”;
infinityads_enable_text_link = true;
</script>