Take Up and Read: C.S. Lewis’ Case for the Christian Faith

I am writing this ongoing blog series on Reflections to encourage Christians to read more vigorously and enrich their lives with Christian classics in such fields as theology, philosophy, and apologetics. Hopefully, a brief introduction to these Christian texts will motivate today’s believers to, as St. Augustine was called in his dramatic conversion to Christianity, “take up and read” (Latin: Tolle lege) these excellent books. 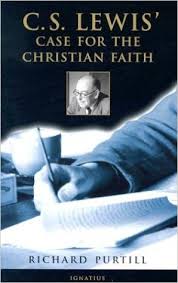 This week’s book is C. S. Lewis’ Case for the Christian Faith by Catholic philosopher Richard Purtill. It is one of the best books for helping people—both those who are new to Lewis and those who know his writings well—to understand Lewis’s basic case for the truth of Christianity. A reliable guide, Purtill explains Lewis’s apologetics thinking with powerful insights.

Why Is This Author Notable?

Richard Purtill (1931–2016) taught philosophy at Western Washington University for many years. A prolific author, Purtill wrote many academic works on philosophy, religion, ethics, and the study of logic. But he was also a popular author of fantasy and science fiction novels. A Roman Catholic by theological conviction and a lover of imaginative literature, Purtill wrote books on the thoughts of both J. R. R. Tolkien and Lewis.

What Is This Book About?

Using his broad knowledge of Lewis’s writings of fiction and nonfiction, Purtill presents, in 10 chapters, Lewis’s basic apologetics approach for the truth of the Christian faith. Purtill’s book introduces Lewis’s thinking on such critical topics as God’s existence, the nature and attributes of God, the person of Christ, miracles, faith and reason, rivals of Christianity, Christian living and prayer, and death and the hereafter.

Purtill systematically presents Lewis’s theological and apologetics ideas with clarity. He also organizes Lewis’s thoughts and provides a basic philosophical framework for seeing Lewis’s case in terms of a logically based worldview. Purtill’s work helps readers to think through and understand the bigger picture. It also encourages people to reread Lewis’s writings with fresh understanding and with a greater overall perspective on Lewis’s apologetics model.

Here, Purtill offers a brief explanation for Lewis’s enormous success and influence as a Christian thinker and author:

The explanation for Lewis’ success is to be found in all the aspects of Lewis as a man and a writer, in his imaginative and moral qualities as well as his intellectual capacities.1

Why Is This Book Worth Reading?

C. S. Lewis is arguably the most influential Christian apologist of the twentieth century. But his books sell better today than when he was living, more than 50 years ago. Anyone who wants to gain a greater understanding of Lewis’s thinking will benefit significantly from reading Purtill’s fine introduction. Read Purtill and then reread Lewis’s masterful apologetics works.

I believe deeply that “all truth is God’s truth.” That historic affirmation means that when we discover and grasp truth in the world and in life we move closer to its divine Author. This approach r… Read more about Kenneth R. Samples.